The Beast From The East has really made itself known over the last week across the country.  Here in Lincolnshire the full force, good and bad, has been felt by commuters, residents and schoolchildren alike.  The emergency services, helped by numerous citizens have done unbelievable amounts of work to keep the county moving as best as possible.

In our own small way Lincoln Drill Hall has been hit by the effects of the snow and ice.  At the time of writing we’ve had to cancel two planned theatre performances and also all planned activity over the weekend, keeping the venue closed for much of that time. Luckily most of the work can be re-scheduled for future dates.

I spoke with BBC Lincolnshire yesterday regarding the rescheduling of The Damned United, a brilliant piece of touring theatre from Red Ladder that was supposed to appear yesterday. Due to the weather, we’ve moved the event to April 10th. Melvyn Prior, the presenter hit the nail on the head when he talked about technology playing its part in helping us continue providing a service.

Our Box Office Manager was unable to get in to the office yesterday, but thanks to our fantastic box office system she was able to work from home, move all of our customers tickets to the new date and contact all of them to either offer refunds or to honour tickets for the new date.  And all from the comfort of a living room table. 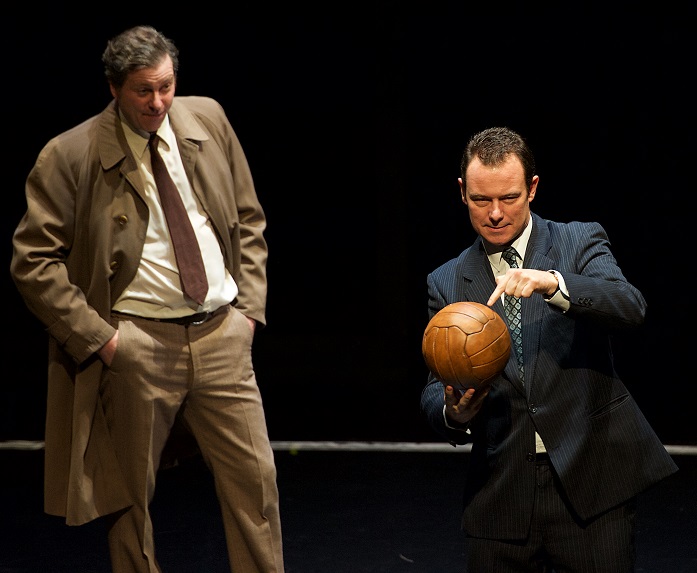 We never take the cancellation or postponement of a show lightly, but have to take into consideration the safety of staff, artists and audience alike.  In the case of The Damned United, we felt more of the audience will get to see it on a new date rather than (excuse the pun) ploughing on through last night.

There were a few of my staff team, hardy souls who did make it into the venue yesterday.  The weather coincided with a big event going on sale.  We’ve been lucky enough to secure two performances from Kevin Bridges as part of the warm up for his next tour.  Warm up shows are always fascinating, the bigger name comics liking to perform in smaller venues to hone their material.  They provide a chance for venues such as the Drill Hall to host acts that we normally wouldn’t get as they’d be playing much larger spaces.

Attendant with this though is the fact that tickets for this type of show are much more in demand.  They were due to go on sale in person and on the telephone at 10am yesterday with on line sales from midday.  The weather meant that we again had to alter our plans, encouraging people not to come out in person, but to book on line which we’d brought forward to 10am in line with phone bookings.  My skeleton staff performed brilliantly answering as many calls as they could and both these shows sold out in around 45 minutes thanks to an uninterrupted online service.  Again, technology played its part in keeping bookings moving.

And a note on sell outs.  We know that there will always be those who are disappointed that they can’t get tickets for shows such as this.  But I believe Lincoln needs more events to sell out quickly.  We need to try and instigate a shift in the booking habits of our audiences, having more shows where that ticket is so hot that you simply must have it as soon as it goes on sale.  Demand in this way is better for venues across the city rather than lots of events that plod along, with audiences knowing that it doesn’t really matter if they book in advance as there’ll be tickets on the night.  The vibrant cultural scene in the city that has grown over the last 10 to 15 years will only be helped with artists and performers knowing that performing in Lincoln is a safe bet for a sell-out show.  These events are good for audiences, good for artists, good for the growing number of venues in Lincoln and as a result, brilliant for the city.

One thought on “On Weather and Sell Outs”