This season at Lincoln Drill Hall we’ve launched our first formal season of Pay What You Decide shows.  6 productions in our autumn programme – all really high quality interesting contemporary performances – have tickets that up front are free.  We’re asking our audience to trust us, try one or more of these performances and only pay us what they think the show is worth once they’ve seen it.

It’s a model used by a number of arts centres already.  The Arc in Stockton though was the first to apply the strategy to whole season of work, with results that have seen audiences and revenues grow.

Local press in the city picked up on this initiative with verve and I found myself doing three different interviews with our local BBC station and an interview with the main commercial station in the city too.  One thing they all asked me was, Isn’t this a bit of a gamble?  What happens if no-one leaves any money?

The answer to this question is always the same.  Any time a venue like ours books a contemporary theatre show we are in effect taking a gamble.  We might know the work or the artist we’re booking, and we can ask audiences to trust us, but this contemporary work, often devised, often combining multiple art forms, with unfamiliar titles and with actors audiences haven’t immediately heard of is a risk and quite honestly, in Lincoln for many years has struggled to draw large audiences.

There are of course exceptions to this. The Damned United from Red Ladder Theatre for example sold 90% capacity earlier this year, drawing on a huge resurgence in football in the city over the last two years alongside our proximity to Nottingham meaning that there re a good number of Nottingham Forest fans for whom Brian Clough remains a hero.  But we continue to seek audiences for this work, supported in part by our NPO funding from Arts Council England. 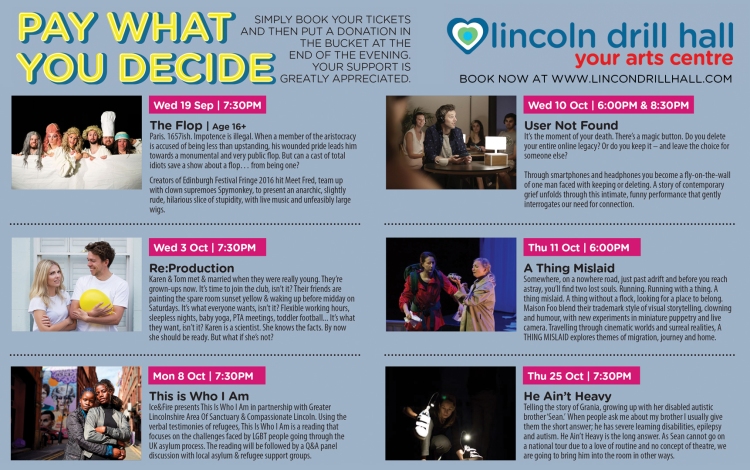 But the gamble is in taking the work, not in encouraging larger audiences to attend by removing the financial barrier for them up front.  For me it’s about widening the audience base.  We have very little financial return on this work, so I’d rather look to have more people seeing the work and engaging with us as a venue,  than persevere with fixed ticket prices that possibly make up the minds of many potential audiences not to book.

And the work is great.  Three of the shows are coming on the back of strong runs at the Edinburgh Festival, garnering award nominations and a slew of 4 and 5 star reviews.  They cover a wide range of subject matter – from starting a family to seeking asylum to considering our on line identity.  They embrace new technologies – two are introducing new captioning technology within their work.

Early signs are good. When comparing these six shows to six in the first half of our season that between then sold 223 tickets with audiences for some around the 19 – 20 mark.  5 of the 6 shows this season are already above that, and the advance ‘sales’ for the opening performance taking place today (19 Sep) have reached 80.

Generally I believe that for most work price isn’t the major deciding factor in someone’s choice – especially when the production is familiar.  However, there is a growing base of evidence that by gaining the trust of your audience you’ll grow that audience and keep them coming back.

So yes, Pay What You Decide may be a gamble, but if it is, we’re saying to our audience, we’re taking that gamble so you don’t have to. We believe it’ll be worth it in the long run.